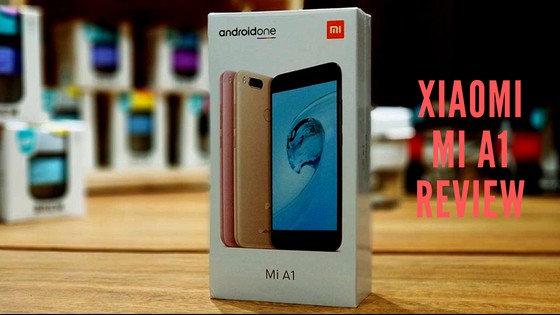 Today we will review pure Android smartphone - Xiaomi Mi A1. Xiaomi Mi A1 runs Android One — the Google operating system designed for low- and mid-ran

Today we will review pure Android smartphone – Xiaomi Mi A1. Xiaomi Mi A1 runs Android One — the Google operating system designed for low- and mid-range phones. It promises regular software and security updates, like a Google Pixel smartphone. Now you can buy this perfect smartphone just for under $200 on Amazon and this is for sleek, smooth metal body that’s 7.3mm thick, a 5.5-inch LCD screen with a 1,920 x 1,080-pixel resolution, a fingerprint scanner, and a dual-lens 12-megapixel camera on the back. It’s all powered by the Qualcomm Snapdragon 625 processor, with 4GB of RAM.

You can buy this phone on Amazon also:

The Mi A1 has design elements in common with other Xiaomi devices but feels like an elegantly crafted upgrade.

It offers a premium metallic feel and looks solid in construction. At 7.3mm, it is still quite slim. Its 165-gram weight feels great in the hand. Although slightly wider, it fits nicely in the palm and has great ergonomics because of its round edges and sleek side profile.

At the back, the dual cameras protrude a bit— an aberration for Xiaomi devices— but it’s neither an eyesore nor a deal breaker. Below the cameras, in the center of the phone, is the Mi A1’s fingerprint reader. We found it to be on par with other devices in this price category.

Overall, the Mi A1 has a striking visual appeal with neat elements, like the nicely crafted speaker grille and the antenna lines at the back. I think that it is one of the best looking Xiaomi devices we’ve seen, ignoring the Mi MIX series of course.

I do have to mention that the rear of the Mi A1 is eerily similar to the iPhone 7 Plus. A lot of Chinese brands have followed this model over the past year, so we would have liked to see something more original, but again, it’s not a deal breaker.

The Mi A1 has two 12-megapixel cameras on its rear: the first is a 26mm wide-angle lens with a 1.25-micron pixels sensor and f/2.2 aperture, and the second is a 50mm telephoto lens with a 1.1-micron pixels sensor and the f/2.6 aperture that offers 2x optical zoom. While Xiaomi is advertising the A1 as having a “flagship dual camera” setup, it’s worth noting that Xiaomi’s actual flagship dual camera configuration on the Mi 6 is quite different, offering both a faster aperture and optical image stabilization on the primary wide-angle lens.

The camera app is the same one that comes with all Xiaomi phones and bears a pretty strong resemblance to Apple’s default camera app. You can tap the x1 and x2 to toggle between the wide-angle and telephoto lens. Unfortunately, if you want to select a zoom setting in between them you have to pinch to zoom. A pop-up slider like the one Apple uses would have been nice here. There are toggles for filters and easy access to various shooting modes, which include panorama, beautify, tilt-shift, a square mode for Instagram, and others. For some reason, there’s also a toggle for enabling a watermark – which is on by default – which adds the words “Shot on Mi A1” in the bottom left corner of every shot. You’ll probably want to turn this off.

Image quality from the Mi A1 is quite decent, but not on the same level as flagship smartphone cameras. Shots tend to be a little grainy in less than ideal lighting conditions and the image is also slightly soft towards the edge of the frame. There’s also some noticeable smearing when you zoom in on details.

The Xiaomi Mi A1 is an Android One phone, so it ships with stock Android 8.0 Oreo. That means there’s not a ton to talk about that wasn’t covered in our massive Android 8.0 review, and that’s a good thing! You get a mostly unaltered build of Android with a design that fits with the rest of the app ecosystem. Everything works, and there are no janky third-party additions to worry about. For Xiaomi, the Android One program is particularly a big deal, since its usual Android skin, MIUI, is one of the heaviest (and worst) Android skins out there.

You get the Google Assistant in this build of Android, and while it will respond to “OK Google” whenever the screen is on, “always-on” mode—which would let it respond when the screen is off—is not an option.

You only get two extra apps after the standard-issue Android stuff. There’s a “Mi Remote” app for using the IR blaster and a “Feedback” app to send your feedback directly to Xiaomi. I was able to quickly get Mi Remote working with my home theater system. You just pick a device type, like “TV,” then pick a brand, and you’ll go through some testing procedures so the app can learn your remote codes. You can uninstall the Mi Remote app if you aren’t interested in IR functionality or if you want to use an alternative remote app.

The “Feedback” app seems unnecessary since it basically just opens an email form to Xiaomi. This seems like something that should be buried in the settings somewhere, rather than existing as a top-level icon. Worst of all, you can’t uninstall or disable the app.

The Mi A1 packs a 5.5-inch LCD display, which is a pretty standard size in the mid-range Android sector these days.

Sadly, it comes with massive bezels at the top and bottom, a fact which not only makes the device bigger than it perhaps should be (the Xiaomi Mi Mix 2 is roughly the same size but boasts a 5.99-inch screen) but also means it looks a little dated when compared to 2017’s leading devices.

While it’s perhaps unwise to expect budget phones to have jumped on the bezel-free bandwagon, Xiaomi has just announced the Redmi 5 which will combine a low price with a massive screen, while other Chinese companies such as Elephone and Maze are already producing devices with minimal bezels.

The screen itself is bright, but the colors look muted and the contrast isn’t awe-inspiring. Everything looks a little washed out, even when compared to other handsets in the budget sector. It’s hard to complain too much when you’re paying so little, but the screen definitely could have been better.

The Redmi Note 4 boasted an exceptional 4,000 mAh battery, but Xiaomi has kept the capacity modest with the Mi A at 3,080 mAh. Battery life was still very good in our testing, although not far above average. Standby times were especially impressive, possibly thanks to the various optimizations in stock Android.

The Xiaomi Mi A1 also supports Qualcomm’s Quick Charge technology, and the bundled 2A charger replenishes the device from zero to 100% in less than two hours, which is good but not incredible.

The combination of Android One optimization and good quality hardware means the Mi A1 punches way above its weight: it’s comparable to phones costing twice as much. The Xiaomi Mi A1 is a pretty solid and well-rounded package. The capable innards are housed in a premium metallic chassis that looks great. In the daylight, the dual cameras shine, and its portraits alone merit a much higher price.

It’s difficult to criticize the Mi A1 given its impressive affordability, but we would have liked to see a more original design and better low-light camera performance nonetheless.

Android One or not, the Mi A1 is a very capable device. Getting a stock Android experience with guaranteed updates, which essentially future-proofs device, just sweetens the deal.

You can buy this smartphone here.